Egyptianchronicles.blogspot.com : On the 26th of January 1952, about 12 PM in the commercial heart of Cairo in Down Town a huge fire started. It was a fire that continued for about 12 hours destroying more than 700 commercial shops and administrative offices. Old generations still remember this fire that came in a very critical time in the Egyptian modern history pre-1952 revolution.

Since the 27th of January 1952 up till now no one knows for sure who is behind the grand Cairo fire; it is a classical Egyptian X-File by all means. There are too many theories and too many suspects starting from the King to the British Forces to the 1940s parties to the free officers themselves up to the favourite banned group in Egypt: The Muslim brotherhood. “It is something classic!!”

You only have to read the sequence of events.

During that time Egypt was on the break of something big, the British forces made it clear that they did not intend to leave the Suez Canal nor Egypt. PM Mustafa Nahas was in a clash with the British occupation forces from one side and the king from another side, of course the king and also Nahas were stupid enough to be enemies anyhow both paid the price later heavily!! This beside the battle that Farouk thought he had won: The officers club elections, it was one single battle and in the end he lost the war against the army officers who could not take it anymore.

The beginning of January 1952 was an indicator that the month would not end except by a disaster. On the 4th of January some churches were burned and Christians were killed in the Suez Canal cities, the British forces did not waste any time and accused the Egyptian resistance using their propaganda machine to give bad 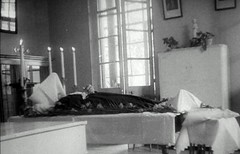 image to the resistance from one side and to divide the Egyptian society in sectarian way from another side. Still the Egyptian society was much wiser, the Christian Egyptians whether Orthodox or Catholic came out in the newspapers suspecting the identity of those who done those series of terrorist acts. In fact it turned out according to the people of the Canal who lived that era that the British forces hired couple of guys who worked in their camps along with the thugs in the cities to do such terrorists act!! “Man I see a history repeating!!”

The resistance operations did not stop then regardless of the propaganda machine that was working perfectly abroad. Already on the 25th of January 1952 there was a battle between the Egyptian Police officers in the Ismailia governorate building and the British forces. The battle was tough and the Egyptian police officers despite their small number and arms compared to the whole British army fought bravely up to the early hours of the 26th of January. For history Fouad Serg El-Din, the interior minister and the entire Al Wafd cabinet headed by Mustafa Pasha El-Nahas supported those officers back then in Suez Canal.

In the morning of the 26th of January 1952 there were protests from the high schools and the universities in Egypt in solidarity with the officers in Suez. About 12 PM fire started down town Cairo.

Now how the fire did not start, when, and where up till is debatable but according to what I believe it was not random, nor it was thugs’ work. It was well organized and pre-planned as emergency plan. This is more like an intelligence plan. I am not going to believe the naïve story once been told by Salah Eissa that it started randomly, it was more than that.The plan was to use the protests and the anger of the public as a cover to launch these terrorist acts , yes I am using the modern terms to describe the acts. To turn it from protests to riots to terrorist acts.

I do not need to read secret documents to know that the propose of this fire was to divert the attention from what was happening in Suez Canal, the British Forces feared that things would go out of control after the 25th of January and there is no way to gain control except through a huge public attention diversion. Think about the financial losses not only about the fire, the financial losses of that day then would estimated now by billions. Shepherd hotel was completely burned to the ground and this was just one example. “The old Shepherd was too big to be compared by the current Shepherd” 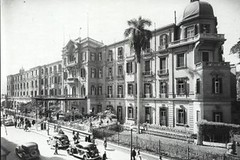 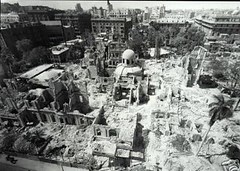 There are more photos in the slideshow for Shepherd after the fire.

On the same day King Farouk was celebrating with his new born crown prince Ahmed Fouad II, he invited all the statesmen, ambassadors..Etc in to a luncheon. The fact that the king was against the Cabinet and he did not react on what happened in those 72 hours gave the impression that he knew in advance and some even goes far and says that he was behind. Farouk was not behind it because if he were behind something so sophisticated and organized, his son would be ruling us right now!! Already all the sources that came after the revolution accusing him of the fire were mostly from books that trashed him by the orders of the revolution itself.

The government after the fire accused political leader and former MP Ahmed Hussein, the leader of “Misr Al Fa’ta” party of it despite he 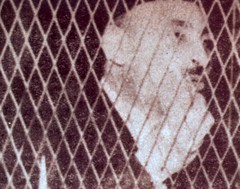 denied totally. The court ordered his execution and by a miracle he survived the death penalty, he was saved by the coup of 1952. By time Hussein proved to be innocent and other names and parties began to appear as I said every group and party were accused from the King to the communists to the Muslim brotherhood even to the Free officers who were unknown yet to most parties.

Who did it from the Egyptian party is the ultimate “X” in our file here that historians want to find because they know that there were two parties involved in this fire : The British and Egyptian traitor “x” so who will it be ??

In our modern definition, this fire would be considered a terrorist act; I would dare and say it that it was our Pre 1952 9/11. When I read the world modern history, I could not find something similar like the incident of the grand Cairo fire in its size or in its preparation.

Losses on that day:

Human losses on that day:

Strangely there were not huge human losses as expected in such big terrorist act, after all it happened on a Saturday morning, during that time Egypt had a big Jewish community that worked in Down Town Cairo, and it was the Jewish Sabbath. Not to mention most young people on that day morning were protesting in solidarity with the Police officers Still people were killed and injured on that day.

Of course if this happens now in this scale I would doubt immediately.

Unfortunately during that time all the foreign media was on the British side, calling the resistance as terrorists and thugs, sounds familiar!!??

Already for them that Saturday was the black Saturday where the Foreign owned commercial stores and cafes were burned and that they were made to attract tourists only was burned in the oriental capital!!?? Watch yourself “it includes footage for the damages!!” I think the British Press forgot to tell its readers that the British government was in debt for Egypt with millions of pounds.

The Egyptian government on the 26th of January declared martial law throughout Egypt. But unfortunately that government, the Cabinet of Al Nahas did not continue to the following day; the 27th. Farouk found a golden /stupid opportunity to sack his old enemy Mustafa El-Nahas.

The British and the foreign press were so happy by the decision of Farouk on the 27th of January to sack Nahas Pasha and to appoint Ali Maher. It is a surprise to me how the Press in UK and in US welcomed Ali Maher who used to cooperate with the Nazis during the WWII!!?? It was also noticeable that the Americans began to have a voice regarding what was going on in Cairo.

Also here is another British Newsreel ,this time it is silent and poor in quality Many people in Egypt remembered it last year when the fire caught for no good reason in the Shura Council, it brought to them memories that did not even live but it is the sequence of the events. The fact that in 1952 too many things happened made people including me for awhile that this fire can be the introduction of some kind of change. After all the year 1952 started with a king celebrating the birth of his crown prince and ended by sending the same king with long waited crown prince to exile then after two years or even less there was a President.

You know judging from the fire of the Shura council and how much time it took to put down the fire ,I wonder how now we can deal with a fire in the size of the grand Cairo fire … after further thought I do not want to imagine , heaven forbids it will be a disaster by all measure. By the way on that day only 1500 firemen saved Egypt without the helps of helicopters and fire engines from outside Cairo

Deep thanks to my dear friend Georges

The Plot Twists and Turns Before…

Ultra-orthodox Jews break into the Aqsa…

President Mohamed Morsi Message to the…

Is “Brotherhood” with America Possible?*

Settlers build near Palestinian villages on…