The last entry on Kareem Al-Beheiri’s blog, egyworkers.blogspot.com, reads, “It is now 7 am on April 6 and I am on my way to the Mahalla textile factory to cover the events of the strikes. I wish success to all seeking to expose the failing Egyptian political system.”

It is unlikely that in those early hours of the morning Kareem expected that a month later his blog would still post the very same entry. Kareem was among the hundreds of protesters, journalists, activists and bloggers arrested around Egypt on April 6 and 7.

Although workers had organized a strike planned for April 6 inside the Spinning and Weaving factory in Mahalla Al-Kubra, State Security forces prevented the workers’ strike from ever coming off the ground. Yet, protesting masses on the streets could not be halted.

Leading up to May 4, Mahalla streets are crowded with State Security vehicles causing Hamdy Hussein, Director of the Afaq Socialist Center to describe the town as being under “military occupation.”

Prior to the protests on April 6, in an attempt to quell the uprising, minister of investment Mahmoud Mohieddin raised worker’s food allowance from LE 43 to LE 90. Days following the April 6 strikes Mahalla workers received a 30-day bonus, while other workers across the country were given a 15-day bonus. In an attempt to placate the masses on Labor Day, President Hosni Mubarak announced a 30 percent raise for public sector workers.

Worker and activist Hamdy Hussein explained that this raise, though played up in the government press was nothing out of the ordinary. “The 30 percent income raise is part of established worker rights,” Hussein told Daily News Egypt.

Hussein stresses that various grassroots factions — not the worker leadership — organized the protests that took place in the city of Mahalla Al-Kubra and across Egypt on April 6 and 7. The people assembled in the streets because of a deep frustration and anger at the political system in Egypt, he added.

Click on the poster below to read the full report… 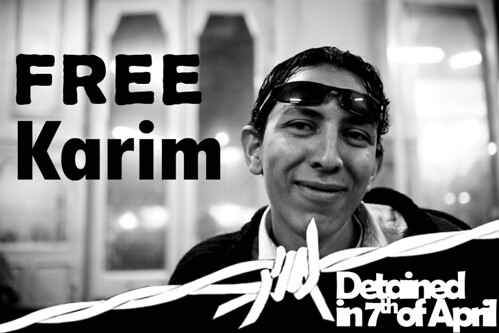 Lawyers had managed to visit blogger Kareem and Textile Workers’ League leading activist Kamal el-Fayoumi, as well as Tarek Amin, in Bourg el-Arab prison two days ago according to a Socialist source in Cairo. I wasn’t told yet any details about how the meeting went, but what the socialist source said, confirmed by Mahalla blogger Abdel Gelil, is that the morale of the detainees is high. What’s worrying however is all detained Ghazl el-Mahalla activists have been officially fired from their jobs by the state management of Ghazl el-Mahalla company.

And to add to the melodrama, it turned out, according to a statement I received from the lawyers yesterday, that both Kamal el-Fayoumi and Tarek Amin were contacted prior to their arrest on 6 April by someone who identified himself as a journalist with the BBC Arabic service, requesting an interview. When Kamal and Tarek went to the agreed place, “they discovered it was a [police] ambush,” added the statement. The BBC should officially respond to this, and give an explaination. Did any of their journalists get in touch with Kamal and Tarek on that day prior to their arrest? If so, what went wrong? But if not, then they should simply ask the Mubarak’s regime why use their name in scams against dissidents!? Next time an Egyptian activist gets a phone call from someone who claims to be from the BBC Arabic Service will definitely think twice before answering any questions or agreeing to meet somewhere…

Fellow activists in Cairo and Mahalla are calling on labor unions around the world to issue new solidarity statements with the Mahalla detainees, who are currently held in Bourg el-Arab Prison, Alexandria, by a martial decree from General Habib el-Adly, Mubarak’s Torturer-In-Chief. We urgently need statements that denounce their sackings from their jobs, and which demand their immediate release and reinstatement. Feel free to email me, or better post your solidarity letters in the comments section, and I’ll do my best to see they reach labor organizers in Egypt…

Second Forum of the Alliance of…

Solar power has great potentional in…

MB Statement on the “Day of…

Nicole Kidman has made a public…

Six Experts on Negotiating with the…

Muslim Brotherhood Warns Against Falling Into…

’Britian should talk to Hamas’