Activists are holding a candle light vigil, Saturday 30 December, 6pm, in front of the UNHCR office in Mohandessin, to mark the first the anniversary of the massacre of Sudanese refugees on the hands of the Egyptian Interior Ministry’s Central Security Forces.

I had learnt about the Sudanese refugees sit-in in Mohandeseen through my house helper Rousse. She is southern Christian Sudanese whose husband has disappeared during the civil war time and whom she knows nothing about. Rousse told me the story of her great escape to Cairo in a 10 days horror trip. She lives in a room in Ahmed Zaki district, a suburb of Maadi mostly inhabited by Sudanese refugees. At some times Rousse couldn’t work because of bone-pain and at many times she had to leave the room where she lives, unable to pay the rent.At 10:00 pm, Thursday December 29th I received an sms saying Mohandesin area is turning to a military camp and Sudanese refugees who have been sitting in for 3 months may be disbursed by force. 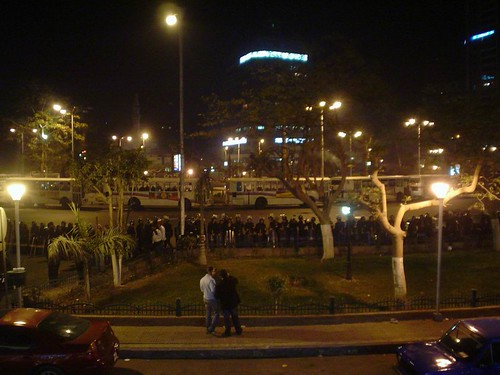 At 1:00 am, and it was really cold, security forced started flushing the Refugees with three water cannons from three different sides. First spray lasted for almost 6 minutes and was rather high. We could see the water reaching as high as the 4th balcony of the near-by building. Probably it aimed at destroying the top of their shelters.

Refugees met the water floods with cheer and dance. We won’t go was their message. A reaction no one at the other side could understand and it rather provoked the ‘they deserve whatever happens to them – they are crazy’ type of thinking.

The few civilians who gathered to observe the scene from far were mostly quiet amused. I painfully heard comments such “let them take a shower to become clean”, “Egypt has been more than patient with them”, “security forces should’ve got rid of them from day one. They (Sudanese) are disgusting”. Laughs interrupted such comments as the refugees were sprayed with water. Few stood silent with eyes wide open at the scene, while only one objected and explained that Sudanese have demands and rights to be met by UNHCR.

A police officer told a friend as he smiled that they badly needed a bath after three months sit in. “We have orders to finish this tonight and we will” he added.

We resorted to the 2nd floor of a Cilantro Café just across the park to be able to observe, take pictures, and make phone calls. Choosing the time to attack the Refugees was more than well planned. Midnight Thursday in the New Year’s weekend. All the media I contacted were out of town for vacation. A handful of political activists arrived but were totally helpless. A couple of human rights activists were with us on the phone all night, mainly Aida. One lawyer, Zyad, was able to break to the refugees themselves but then was roughed up and forced out.

The rest? Another shame

Almost an hour later another 5 minutes of continues water showered them. This time water was low, strong and direct straight at the people.

Water stopped and a negotiation round started with a Refugees delegated committee, an Egyptian official, and a UNHCR official. The Egyptian said “UNHCR will do nothing for you. We are authorized by the highest power in the state to disburse this sit in today”. Refugees’ reply was “we will die on the turf”. 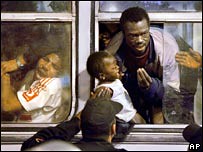 I was able to step to the second security circle surrounding them. A public bus waiting in the area had five Refugees at the back seat while a sixth one was being brutally beaten by 5 state security soldiers. From my position next to the bus I could see and hear him screaming as they beat him on his head and back with hands and batons, kicked him, and twisted his arm and wrist behind his back as his screams went louder and louder. An officer standing next to us explained that he is trying to break the window and escape because he is drunk. At this point a man from the back seat opened the window holding a few months old baby girl as he cried “we are not drunk, I am not drunk, he is not drunk, and this baby is not drunk. Her mother died here in this park”. They beat him to silence as well and continued with the sixth guy. A young man videod the scene on his cell phone and later Bluetoothed it to me.

Reporters, observers and the few activists who were there started to leave the scene as time passed with no further developments. It was very cold and my hands and nose were freezing. It was unimaginable to imagine wet people! 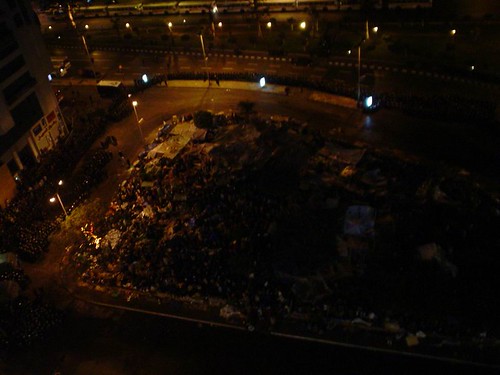 At around 4 am we managed to get to the building of Al Watany Bank of Egypt and only then we had a full clear view of the situation from high. In Mustafa Mahmud square, the part I could see from Gamet el Dewal and Lebanon streets, and the side street of the mosque I could count 60 state security wagons, 6 ambulances, 10 armored cars and uncountable busses.

At 4:45 am the troops were lining up properly and the first circle of formations moved closer to surround the refugees. Their warm up exercise echoed in the empty city as they exchanged stepping on each foot at once saying ho- ho- ho- masr! and singing ‘ya ahla esm fel wegood yaa masr’ meaning To Egypt, who has the most beautiful name ever, whose name was created to be eternal, for Egypt we live.. and for Egypt we die.

Refugees lined up and started warming up too but saying ‘allah akbar’, ‘la ilaha ella allah’ and ‘hasbona allah wa neama al wakil’ meaning there is no god but allah and only him we delegate to handle our injustice. The Christians chanted Halleluiah. And this set identity for the war players. The few civilian audience started cheering for the Egyptian army against the dirty / black / Christian parasites. Yes, there was no humanity in the scene.

At 5 am sharp the 3 water cannons flushed them again and right beside the water line security forces timely attacked the Refugees campus with batons and shields. After 1 minute the water stopped. Soldiers destroyed the rest of their makeshift homes and pulled up their front line of luggage throwing it away as other soldiers made their way in.

Refugees fought back with wood sticks (that was keeping their shelters), plastic empty water jars and gallons, and their hands. 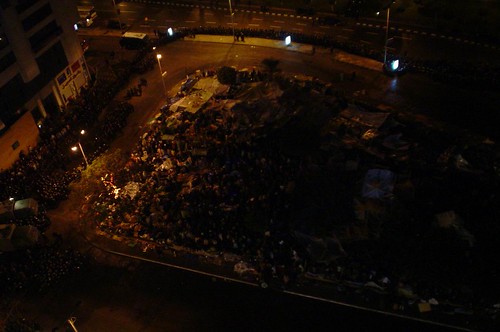 The left side (the side of Radwan Ogeil store) fought back very bravely and was able to force soldiers retreat out for three times throwing on them their helmets after kicking them away but the other two sides soldiers were breaking in. Sounds of sharp metal hits were heard loudly. I guess these were the wooden sticks on the metal shields. Also sounds of screams, mainly women and children, echoed. 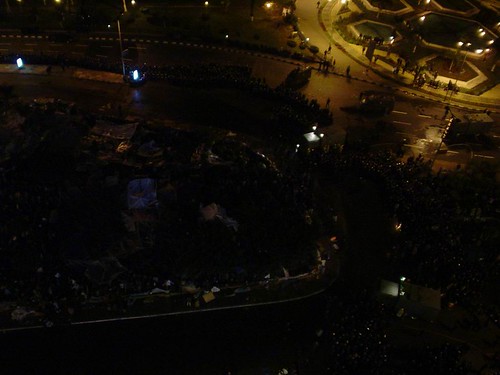 In 10 minutes time, a whistle was heard and all forces pulled out of the garden. Lines were reorganized. Extra troops added to Al Ogeil store side and in couple of minutes signal was given and they lashed back in.

This time was fierce. The street lights were cut off. Screams never stopped; the most acute were children’s. My eyes couldn’t follow where or where to look. It was cold. It was dark. I am sure the garden was muddy after all this water. Soldiers were brutal. They were just beating anyone anywhere stepping over anyone and anything.

Every 2 or 3 seconds a Refugee would be dragged out of the horror circle, beaten all the way out, another 3 – 4 soldiers will take grip of the Refugee so the first soldier could go back hunt another one. The soldiers receiving the Refugee beat him more up with batons on his back, bringing him down to his knee, slapping the back of his head, dragging him to a bus where other soldiers take care of the next stage. All the way through, obscenities could be heard.

This happened to men and women equally. Sometimes when the victim was a woman I saw a child trying to hang to her leg as the soldiers drag the mother.

I saw four Refugees carried by soldiers from their arms and legs, oftenly dropping midway in total motionless and I could swear they were dead.

The most horrible was the EGYPTIANS! Civilians who cheered as if they are cheering for the “army forces” freeing Palestine! As forces advanced in battle; the audience cheered, whistled and clapped. They were amused!

Resistance was weakening on Al Ogeil side and soldiers breaking fully in when my host, standing beside me in the balcony said “we are entering from the left side”. I looked back at him in shock. This is not “we”. He said “I mean the Egyptians”. These are not Egyptians. He said “whatever”.

As the Refugees were dragged out in bigger numbers they forced them to sit the ground on groups casually beating them till soldiers will come pick them and put them in busses.

A friend later told me he saw an officer spitting on a bus as it moved away with refugees!

Resistance fully collapsed. As fewer Refugees were left inside the garden facing at least 2500 soldiers the screams became sharper, louder and desperate.

Everything was over at 5:30 sharp. 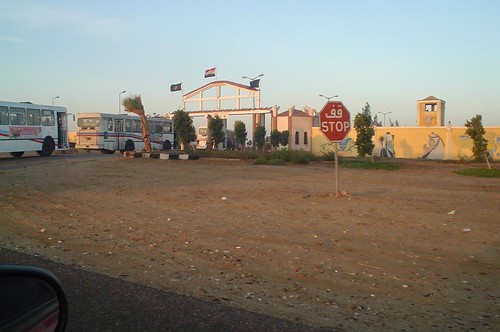 When I took control over my body, I picked up my car and followed 6 of the white public transportation busses carrying almost fainting Refugees and state security forces to Dahshur State Security Camp in Fayoum road. They arrived there at exactly 7:15 am. The camp is almost 40 kms outside Cairo. Distance could be more or less, I was so tired and so not well. The wagon numbers were 3686, 4107, 6132, 4335, and 3696. I missed the numbers of the first bus. 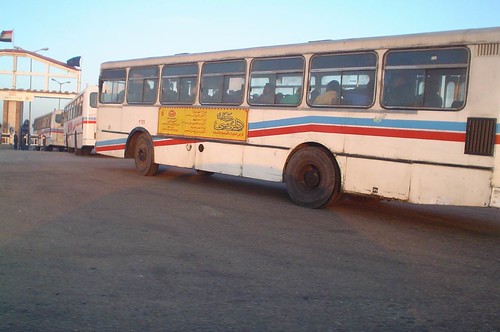 Returning back to Cairo I went directly to the battlefield. Let the pictures speak. 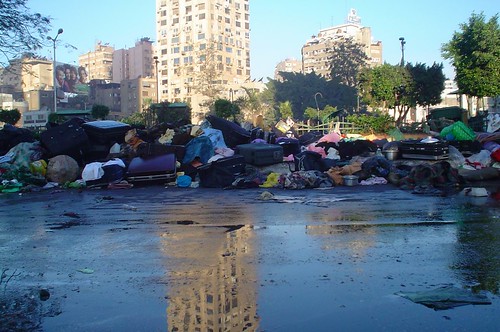 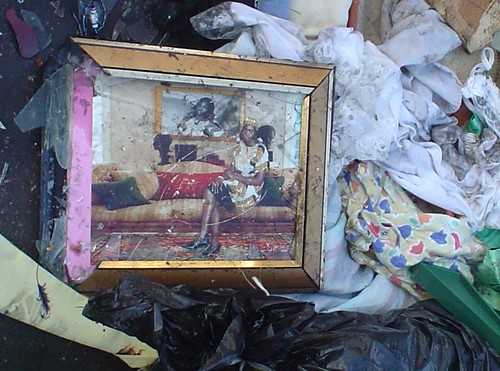 At 11 pm I called Rousse and found her at home. By coincidence she didn’t join the sit in that bloody night. I can’t imagine what I would – or wouldn’t – do if she was inside.

So far 20 people died. There is news that those who were taken to 6th October state security camp are all released. And some are released from Turah. No news yet from Dahshur.

Individuals, groups, lawyers, associations are protesting in the same place tomorrow Saturday 12 noon both the brutality of the Egyptian government and the disgraceful role of UNHCR.

But who would protest the Egyptian People?
The inhuman, the racist, the sadistic!

Don’t Judge A Group By Its…

MB Lawyers: Fees Reduction is Not…

Guns, not roses, for Iraq