Daily Mail: The Brave Women of the Middle East

After being viciously beaten by a 10-strong mob of Egyptian male soldiers, this woman lies helplessly on the ground as her shirt is ripped from her body and a man kicks her with full force in her exposed chest.

Moments earlier she had been struck countless times in the head and body with metal batons, not content with the brutal beating delivered by his fellow soldier, one man stamped on her head repeatedly.

She feebly tried to shield her head from the relentless blows with her hands. 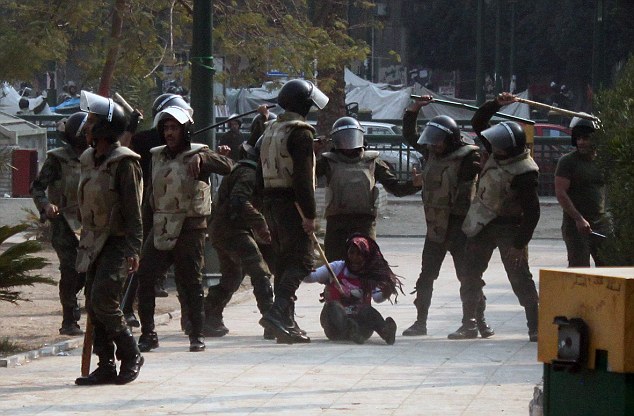 Outnumbered: This woman screams in pain as she is surrounded by five male soldiers during protests in the Egyptian capital and beaten with poles

But she was knocked unconscious in the shameful attack and left lying motionless as the military men mindlessly continued to beat her limp and half-naked body.

Before she was set upon by the guards, three men appeared to carry her as they tried to flee the approaching military.

But they were too slow and the soldiers caught up with them, capturing the women and knocking one of the men to the ground.

The two other men were forced to abandoned their fellow protestors and continued running, looking helplessly back at the two they left behind being relentlessly attacked as they lay on the ground.

This is just one of the hundreds of shameful injustices seen in Cairo’s Tahrir Square where Egypt’s military took a dramatically heavy hand on Saturday to crush protests against its rule.

Aya Emad told the AP that troops dragged her by her headscarf and hair into the Cabinet headquarters. The 24-year-old said soldiers kicked her on the ground, an officer shocked her with an electrical prod and another slapped her on the face, leaving her nose broken and her arm in a sling.

Mona Seif, an activist who was briefly detained Friday, said she saw an officer repeatedly slapping a detained old woman in the face.

‘It was a humiliating scene,’ Seif told the private TV network Al-Nahar. ‘I have never seen this in my life.’ 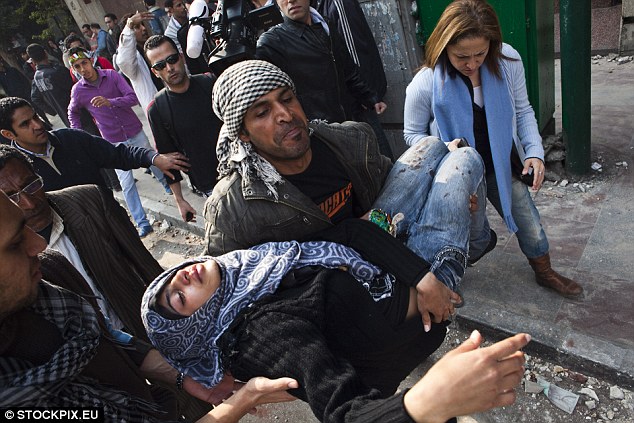 Brutally injured: This woman is left barely conscious and splattered in blood after being beaten the military in violent clashes between rock-throwing protesters and military police 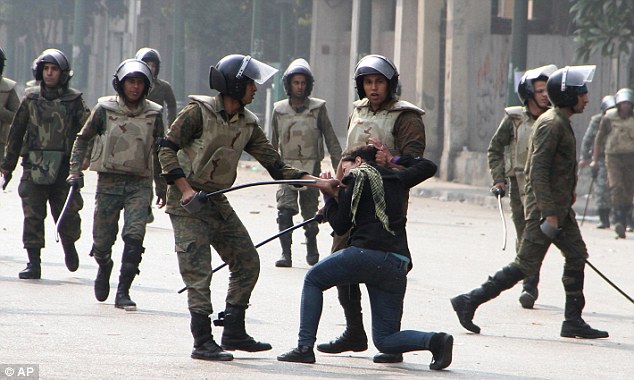 Shameless: Egyptian army soldiers use brutal force to arrest this female protester and drag her by her hair during clashes with military police near Cairo’s Tahrir Square 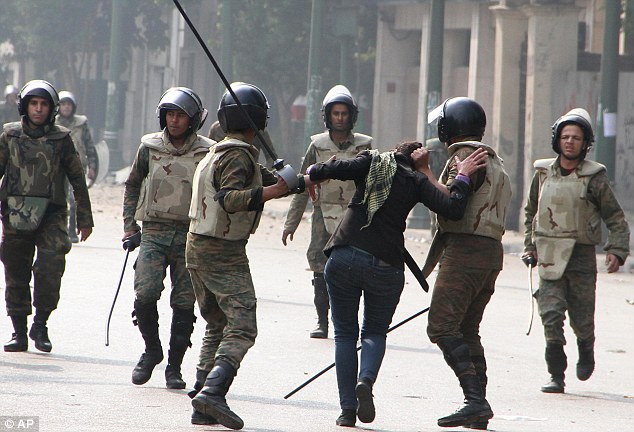 Violent: The heavy handed Egyptian army soldiers drag the arrested a woman protester off by her hair

In Bahrain a similar pictured was emerging with a video clip showing a female human rights activist being hit by a policewoman during clashes between police and anti-government protestors.

Police fired teargas to break up a demonstration by several hundred people on the outskirts of the capital, Manama where several women staged a sit-in protest trying to block a main road.

After nearly 48 hours of continuous fighting in Egypt’s capital more than 300 were left injured and nine dead, many of them shot dead.

The most sustained crackdown yet is likely a sign that the generals who took power after the February ouster of Hosni Mubarak are confident that the Egyptian public is on its side after two rounds of widely acclaimed parliament elections, that Islamist parties winning the vote will stay out of the fight while pro-democracy protesters become more isolated.

Still, the generals risk turning more Egyptians against them, especially from outrage over the abuse of women.

‘Do they think this is manly?’ Toqa Nosseir, a 19-year old student, said of the attacks on women. ‘Where is the dignity?’ 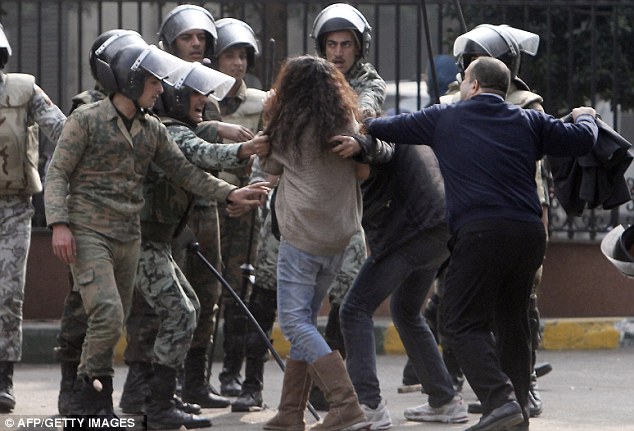 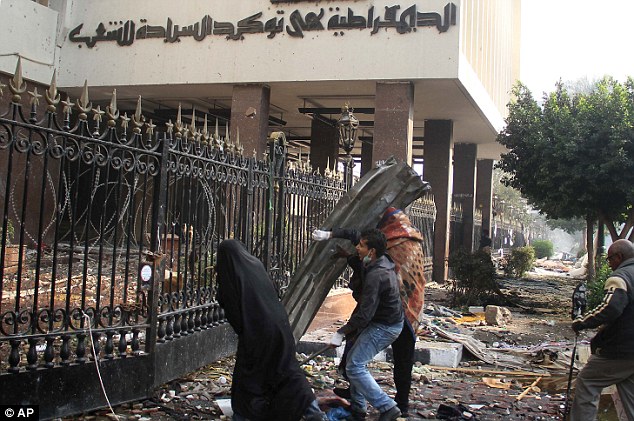 Protection: A female and two male Egyptian protester use a metal sheet as a shield as they throw rocks at military police, unseen, behind the gates and inside the Parliament building near Cairo’s Tahrir Square 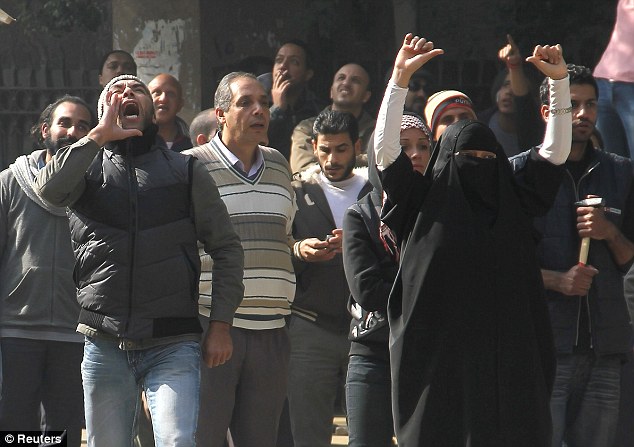 Brave: Two women join protesters as they shout anti-military council slogans near the cabinet in Cairo

Nosseir joined the protest over her parents’ objections because she couldn’t tolerate the clashes she had seen.

‘No one can approve or accept what is happening here,’ she said.

‘The military council wants to silence all criticism. They want to hold on power … I will not accept this humiliation just for the sake of stability.’

Nearby in Tahrir, protesters held up newspapers with the image of the half-stripped woman on the front page to passing cars, shouting sarcastically, ‘This is the army that is protecting us!’

‘No one can approve or accept what is happening here,’ she said.

‘The military council wants to silence all criticism. They want to hold on power … I will not accept this humiliation just for the sake of stability.’

Nearby in Tahrir, protesters held up newspapers with the image of the half-stripped woman on the front page to passing cars, shouting sarcastically, ‘This is the army that is protecting us!’ 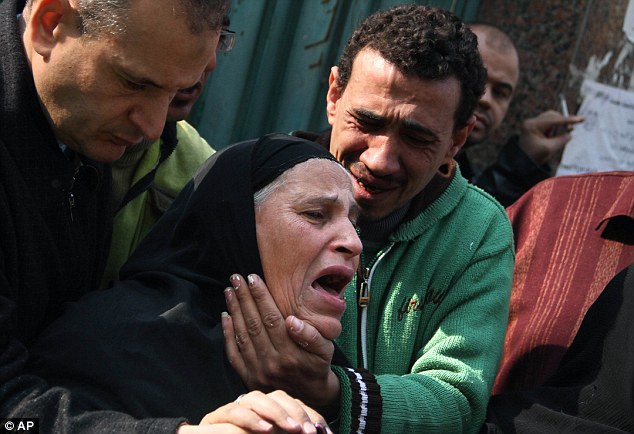 Grief: A woman mourns slain Egyptian protesters who were killed during the latest clashes with Egyptian soldiers, while they wait to receive their bodies in front of the morgue in Cairo 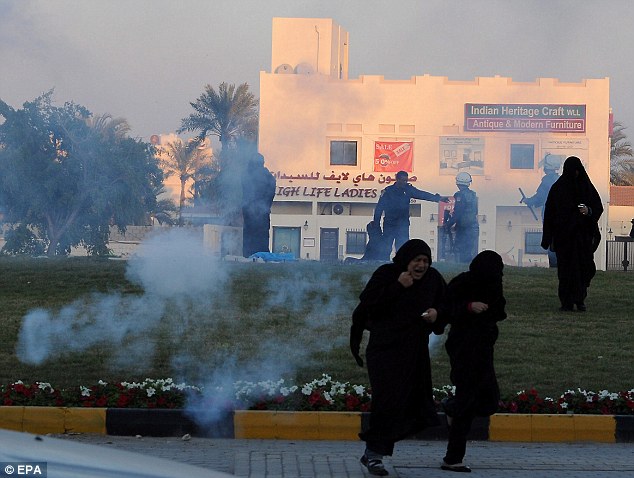 ‘Are you not ashamed?’ leading reform figure and Nobel Peace laureate Mohamed ElBaradei posted on Twitter in an address to the ruling military council.

He accused the protesters of being ‘anti-revolution.’

The main street between Tahrir Square, the epicenter of the anti-Mubarak protests, and the parliament and Cabinet buildings where the clashes began early the previous morning looked like a war zone on Saturday.

Military police on rooftops pelting protesters below with stones and firebombs and launched truncheon-swinging assaults to drive the crowds back.

Young activists put helmets or buckets on their heads or grabbed sheets of concrete and even satellite dishes as protection against the stones hailing down from the roofs.

Democracy Support in the Middle East

Obama is too friendly with tyrants

What Has Happened To The Israeli…

Khudari appeals to EU to demand…