Around 30 Egyptian Cameramen assembled today in front of Press Syndicate in downtown Cairo, to protest police assaults against them while covering demos, and to condemn the recent draconian decree by the Parliament Speaker to ban photographers from taking shots during sessions, after Al-Masry Al-Youm published a picture of PM Ahmad Nazif eating watermelon seeds while a parliamentary session was proceeding. The photographers laid down their cameras in one line on the floor, and sat in silence in front of them for an hour, carrying banners denouncing police brutality like: “Our Cameras Expose Your Abuses.” 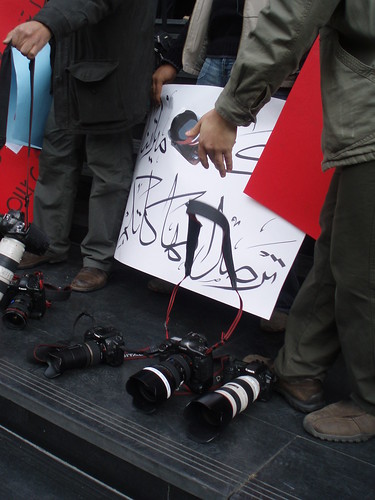 The protestors were all Egyptians either working for foreign news wire services like AP, Reuters, DPA, or to independent publications like Al-Masry Al-Youm, Al-Wafd, Al-Osbou’, Sawt el-Umma, Al-Watani, Al-Karama, Al-Fagr, Al-Ahrar… and more interestingly, representatives from the state-owned publications also showed up including photographers from Al-Ahram, Al-Akhbar, Al-Gomhorriya, State Radio & TV Magazine, and the govt-owned Middle East News Agency. I was told after the demo was over that even a photographer from the NDP’s Al-Watani Al-Youm showed up!
Click on the photo I took below to watch a slideshow of the demo… 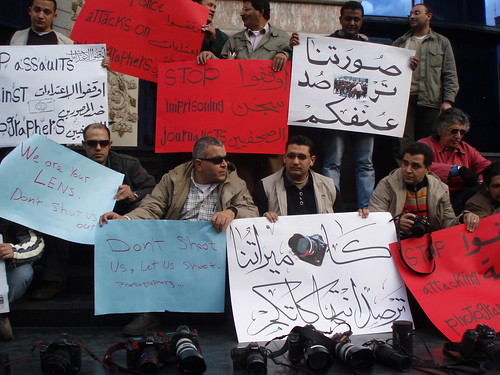 The Press Syndicate council member Mohamed Abdul Quddous, who attended the protest, denounced the government attacks on photojournalists. He also announced that parliamentary affairs correspondents were planning to boycott covering parliament news if the banning decree against photographers is not retracted. No date for the start of the boycott has been announced yet.
Here’s an AFP report by Paul Schemm…

CAIRO,(AFP) – Egypt’s news photographers staged a protest in downtown Cairo on Saturday protesting their exclusion from parliament following the snapping of an unflattering picture of the prime minister eating watermelon seeds.
Some 30 photographers from Egyptian newspapers and international wire agencies laid their cameras out on the steps of the Journalists’ Syndicate and carried banners reading, “We are your lens, don’t shut us out” and, “Our cameras reveal your violations.”
The photographers were also protesting what they describe as persistent police attacks on them while carrying out their job, with many having their cameras taken away or smashed. They described their exclusion from parliament as only the latest assault on their profession.
During Prime Minister Ahmed Nazif’s visit to parliament on Tuesday, a photographer from the independent daily Al-Masri Al-Youm snapped a picture of him eating peanuts and watermelon seeds during the session.
The following day, Speaker of Parliament Fathi Surur ordered that photographers would now be banned from parliament save for a brief five minute shoot each session.
The Egyptian press, especially the opposition papers, delight in printing pictures of MPs arguing, talking on their cell phones or sleeping in the course of sessions.
“Five minutes will not be enough for us to do our job,” photographer Mahmud Shoeib of the state-owned daily Al-Gomhuriya told the Egyptian Gazette. “Sessions can get heated at any moment.”
Photographers are often targeted by policemen or plainclothes enforcers during demonstrations.
In the 2005 legislative elections, Associated Press photographer Amr Nabil lost an eye when he was struck by a brick thrown by a member of the security services.

Here’s a photo I took of Amr Nabil, the AP’s brave photographer… 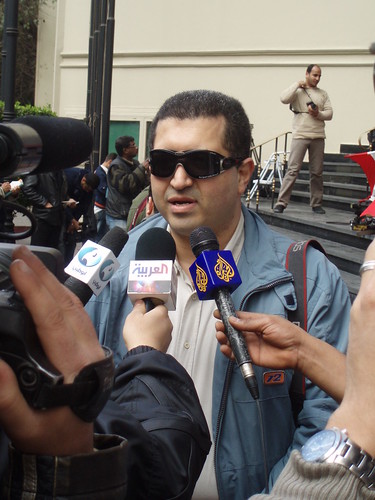 The very gifted photographers Nasser Nouri and Amr Abdallah, who’ve been kindly sharing their pix with 3arabawy and The Arabist blogs, and who suffered on a number of occasions from police brutality during demos, were also present.
Here’s a photo I took of Nasser… 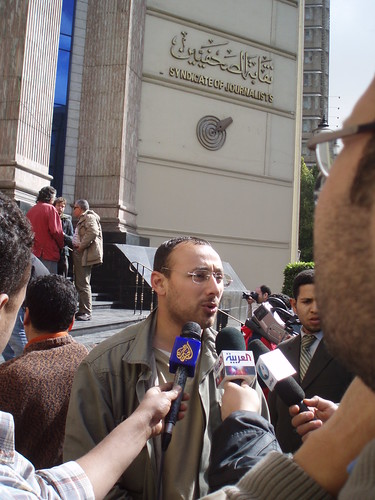 And here’s one of Amr…

The protest finished shortly after 12 noon. I later met Al-Masry Al-Youm’s investigative journalist and dear friend Ali Zalat, who was interrogated yesterday by the North Giza Prosecutor as a witness in the case of Imbaba’s Videogate.

Ali’s friends were concerned for his safety yesterday as he was being followed by police agents from the Imbaba Police Station when coming out from the Prosecutor’s building. There were even false rumours he was detained, that’s why several concerned friends were in touch with Ali over the phone as he finally departed the Prosecutor’s building safely, in the company of the EOHR lawyers shortly after 1am.

IPA imposes blackout on transfer of…

Amnesty Calls on Egyptian Authorities to…

War Against Iran and the Logic…

IOF bombard Beit Lahia, round up…

Declassified Key Judgments of the National…