Initially, the lawyers were not allowed access, but they are now attending the interrogations with our friends.

No lawyers are answering their mobile phones at the moment, coz they are inside. We are still trying to confirm what charges are being levelled against the activists. There are unconfirmed reports that the charges include:

3-Agitating against the new constitutional amendments

The activists present at the moment in front of the Galaa Prosecution Office are not optimistic, and expect the prosecutor to order a (renewable) 15-day detention period.

More worryingly, activist sources citing lawyers who managed to have a look at the State Security police report filed to the prosecution say that SS have drawn up a list of activists they’ve been monitoring and are threatening to detain if they show up in future demos, including:

UPDATE: Photographer and friend Amr Abdallah took some photos of the clashes between Kefaya anti-Mubarak demonstrators and the plainclothes police thugs. Click on the pic below to go to his flickr account… 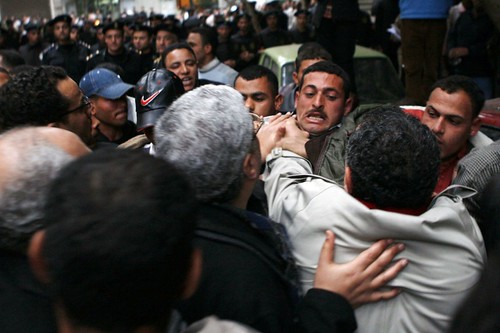 How Close is America’s Demise?

Torture and torment in 2007 AD

Human rights irony for the US…

One injury, dozens of suffocation cases,…

Center for the Study of Islam…

Occupation plans to increase settlers in…